Happy International Beer Day! A day (if you’re of age) to crack a cold one and enjoy responsibly. Craft beer has become extremely popular in the past decade. We love our craft beer scene here in our Curious Communities. So much so, that we decided to write a blog about it highlighting the big three breweries in our area. They are Backpocket Brewing, Big Grove Brewery, and ReUnion Brewery. Each has something for anyone to enjoy including lagers, pale ales, sours, IPAs, and stouts. First, let’s talk about the process of making a good beer.

The process of making craft beer is more complicated than you probably realize and involves a lot of science. No matter what step or style, all ingredients need to be measured perfectly. Several tests are done throughout the whole process with some breweries, including Big Grove and Backpocket, having legit labs for testing. There is a hot side and a cold side each consisting of multiple steps. Without much detail, the hot side in order goes malting, mashing/lautering, and boiling. These steps are where three of the four main ingredients are added, grain, water, and hops. At the cold side, the beer is put through a chiller to cool down and moved to a fermentation tank. Yeast, the final main ingredient, is added. Some breweries move their beer from fermentors to what are called brite tanks to mature before putting it in cans, bottles, or kegs. Others just take the beer straight from the fermentor. The general time frame from start to finish can range from three to eight weeks. 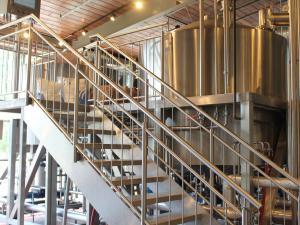 Out of the three breweries we are highlighting, Backpocket Brewing in Coralville (pictured above) was the first to settle in our Curious Community. Starting out small in McGregor, Iowa as Old Man River Restaurant and Brewery in 2008, they relaunched as Backpocket Brewing on the Iowa River Landing in June of 2012. Since then they have grown into a 30 barrel system. This means each time they brew a beer, they can make 30 barrels at a time. One barrel equals 31 gallons (you do the math). They have 14-100 barrel fermentors in their facility (pictured below) and two brite tanks. Every test sample they do is all done in house. 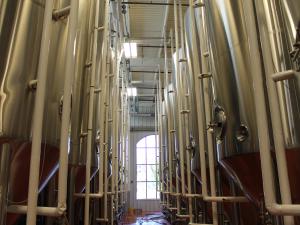 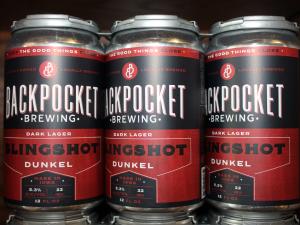 Core beers are ones made and in stores year round. Backpocket has five core beers in Gold Coin Blonde Lager, Murderhorn Golden Ale, Raygun IPA, Bubba Hazy IPA, and their most popular Slingshot Dunkel Lager (pictured above). They also do several experimental and seasonal beers with popular ones being fall favorite Hawktoberfest (don’t worry ISU fans they also make a Clonefest) and other Raygun series beer. Their beer is mostly put in cans and kegs and they are the only brewery in our Curious Community that still dabbles in bottles on a limited basis. Their canning line (pictured below), cans 40 to 45 beers per minute. This process is actually really cool to watch. If you visit their taproom in Coralville, you will be able to try beer from 18 different taps. Backpocket also has a taproom in Dubuque which opened in 2017. 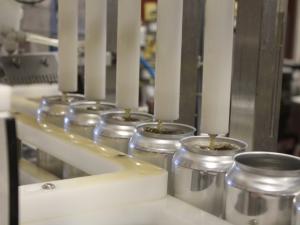 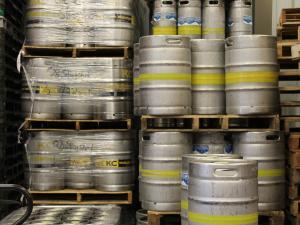 Big Grove Brewery, the biggest of the three, got their start in 2013 when they opened a small brewery and restaurant in Solon (pictured above). In 2017 they expanded to a second location in Iowa City on Gilbert Street (pictured above) that now is their main production site with a 60 barrel system. Beer is still brewed in Solon but only at seven barrels. Since expanding four years ago, Big Grove has grown an insane 300%. In Iowa City, they have 22-60 barrel fermentors (pictured below) and they also utilize brite tanks. Before their beer goes into a brite tank, it gets put through a centrifuge which speeds up the natural settling process of the beer. They are the only brewery in the area that does this step. All their beer tests are done in house in a lab (pictured below). 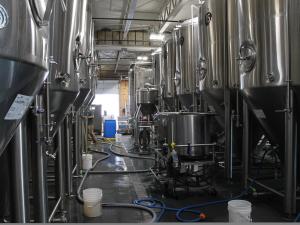 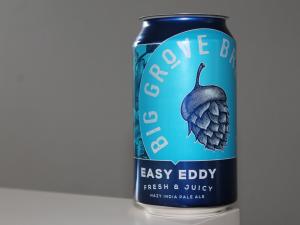 Big Grove has nine core beers sold all year round. They include 1939 Amber Ale, Arms Race Pale Ale, Big Grove IPA, Boomtown Golden Ale, Que Será Sour Ale, Double Blackberry Sour, West Main Wheat Ale, Iowa City Lager, and their most popular Easy Eddy Hazy IPA (pictured above). Easy Eddy was a gold medal winner at the 2019 U.S. Open Beer Championships. Yeah it’s that good. You will also be able to find one, if not many, of their multiple specialty and seasonal beers on shelves including Summer Jam Sour for hot days. Big Grove’s canning line (pictured below) operates at 70 to 74 cans per minute. For kegs, no problem, they have 60 tap lines at their bar in the Iowa City taproom. Big Grove currently has set plans to keep expanding in Iowa with new facilities coming to Cedar Rapids and Des Moines. 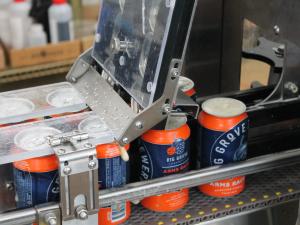 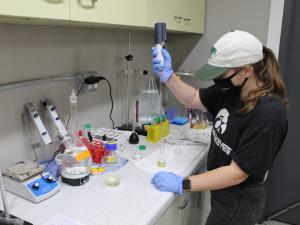 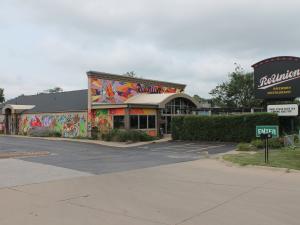 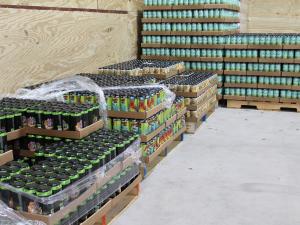 Last but certainly not least we have ReUnion Brewery who opened on 2nd Street in Coralville in 2015. For five years they made beer from a 10 barrel system in their Coralville Taproom before the demand became to big. In 2020 they added a 30 barrel production site in Iowa City with beer still being brewed in their original area. The production site, dubbed “The Juice Factory”, is home to six 60 barrel fermentors (pictured below). There is plenty of space in the production site to keep on growing. Out of the three breweries, they are the only ones that do not use brite tanks. They take their beer straight from the fermentor and trust us, it still taste great. All tests are done by their brewers in house. 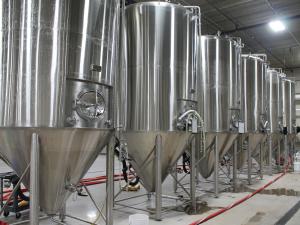 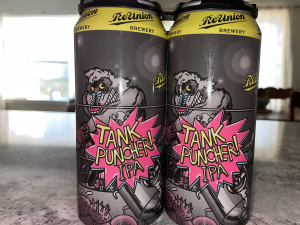 ReUnion has five core beers. They are Juice Factory Pale Ale, ReUnion IPA, Floral Pilsner, Pounder Hazy Pale Ale, and their most popular Tank Puncher IPA (pictured above). You can also bet they make multiple seasonal and specialty beers including Marzen Amber Ale and Something Wicked Sour. One thing that makes them stand out is each beer can has their own unique and flamboyant designs which are made by local artist Jon Sims. Not one is the same and all catch the eye. Their canning line at the production site (pictured below) busts out 40 cans per minute. If you visit ReUnion’s taproom in Coralville you will be greeted with 16 taps so there will always be something you’ll like. You can take a virtual tour of the taproom right now on their website. 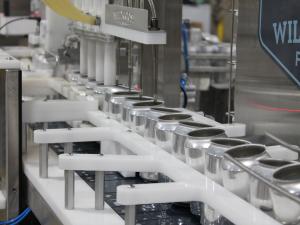 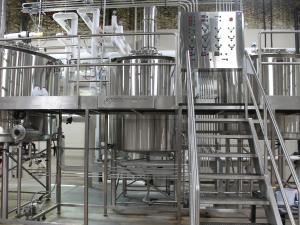 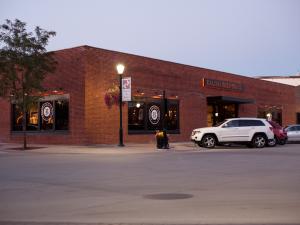 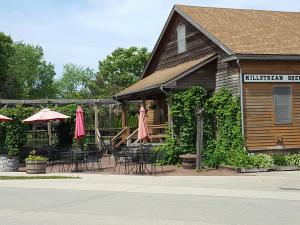 We would be doing a total disservice if we did not mention two other breweries loved by our Curious Community. They are Millstream Brewing Co. in Amana and Kalona Brewing Company in Kalona (both pictured above). Millstream is Iowa’s oldest brewery opening their doors in 1985 and has been going strong ever since. All their beer is put in glass bottles. Kahola, who uses cans, opened what they call is a destination craft brewery in 2012. Both are equally worth the short drive out of the city and most definitely deserve to be mentioned.

We are calling on all beer lovers to visit our great breweries and buy their beer in stores. Not just today, on International Beer Day, but on any day of the week. They all work very hard to bring the community the best beer they can and make something for everyone. If you are to remember anything from this blog remember these two words, drink local.

Eat Around the World in the Iowa City Area