The sweltering Iowa days of July and August are upon us – luckily, Iowa City has a unique stock of mesmerizing architectural wonders to hide out in. Thanks to local visionaries with outsized plans of bringing world-class buildings to Iowa City, they have created a living museum with architectural works from some of the most influential designers in the world.

After designing the (now old) Illinois State Capitol building, architect John F. Rague was commissioned to design what would become a second old state capitol in Iowa. Completed in 1846, it was built in the Greek Revival style, popular with government buildings at the time. Its tenure was short as Iowa moved its capitol to a centralized Des Moines location in 1857. Today, you can enjoy the building as a living museum of the old governmental functions, and view the rotating exhibits in both the Hanson Humanities Gallery and the Keyes Gallery for the Arts.

Just next door to the Old Capitol sits MacBride Hall, designed by Des Moines-based architecture firm Proudfoot and Bird in 1908 at a cost of $313,872. Its Beaux-arts style is said to have been inspired by the great Columbian Exposition of 1893 in Chicago. While the Neoclassical stonework is impressive, the University of Iowa Museum of Natural History within the building offers its own visual treats. Don’t miss the Mammal Hall on the third floor, whose elegant displays feature a giant panda, a wooly musk ox, and a 47-foot Atlantic right whale skeleton. 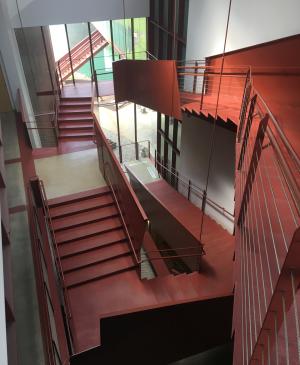 Fast forward into the 21st Century, and west across the river to two University of Iowa Art Buildings designed by New York architect Steven Holl (with HLKB and BNIM serving as architects of record, respectively). Art Building West, built in 2007, was said to have been inspired by a 1912 sculpture of a guitar by Pablo Picasso. The building is clad in weathering steel, and features an interior sculptural grand stair leading one slowly through the building towards the art library. Step into the library, rigorously organized along the cantilevered prow that hovers effortlessly over the old quarry pond. Stop by during the school year to see student art exhibitions in the first floor galleries.

Following the floods of 2008, the Visual Arts building was forced to find a new home, and once again Steven Holl was commissioned for the task. The new building sits just up the hill from Art Building West, and is a strong departure in form, material, and circulation. The façade—comprised of perforated zinc, stainless steel, and channel glass—gives little hint of what goes on within the building. Sneak inside to experience the light-harnessing atrium and meander through the white interior to steal views of student works in progress.

Walk slowly north from the Visual Arts Building to happen upon Hancher Auditorium, designed by New York and Connecticut-based firm Pelli Clarke Pelli, with Cedar Rapids-based firm OPN serving as architect-of-record. Completed in 2016, Hancher is a replacement of the flooded concert hall that had lived south of the new structure. Clad in stainless steel, and warm wood soffits, its curvilinear form and surrounding landscape take inspiration from the adjacent Iowa River. Grab a ticket to a show or just wander in, order a glass of wine at the Stanley Café, and enjoy the contemporary grandeur of the public spaces.

The original Voxman School of Music was another casualty of the 2008 floods. Its replacement in the heart of Downtown Iowa City is a state-of-the-art rebirth orchestrated by Seattle-based firm LMN Architects, with Iowa City-based Neumann Monson serving as architect of record. The gleaming terra cotta façade and shingled glass will draw you inside to hear some of the best musical performances around. Equipped with multiple recital halls, a black box theatre, an organ hall, and a grand, state-of-the-art concert hall, there are many venues to enjoy the sounds of what Voxman’s students have to offer. The best part is that most shows are free. While not soaking yourself in music, wander the expansive atrium and enjoy a number of sculptural pieces by world famous artists like Dale Chihuly and Richard Hunt.

All posts are the sole opinions of the author and are not sponsored by Think Iowa City. For information on how to become a contributing writer, contact us.

The Best Places for Dogs (& Dog Parents) in Iowa City