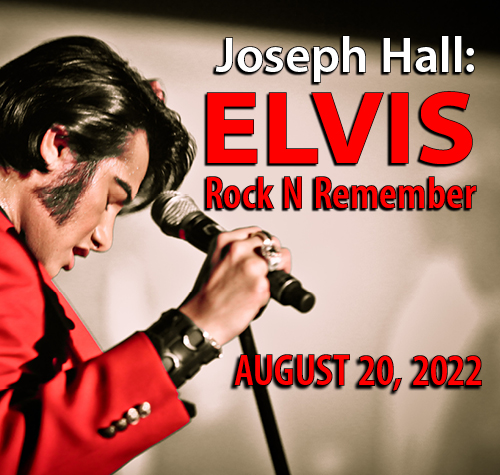 ELVIS IS IN THE BUILDING! Joseph Hall is thrilled to present his Elvis Rock N Remember tribute show! This show celebrates the roots of Elvis, yet is a fast-paced concert that makes it difficult for you to stay in your seat. It caters to both the young and the young at heart. He’s got the look, the voice, the charm, and the moves that take us back to a time when parents were flabbergasted by the flauntingly provocative hip action.

In Hall’s Elvis Rock N Remember show, he achieves a powerful flashback experience to the moment when fans fell in love with the talented, handsome, carefree, energetic, high-spirited young man that is Elvis Presley. The show is masterfully produced with a mixture of Elvis hits from rock n roll, country, pop to gospel, multiple costume changes and a heartfelt tribute to our veterans. He’s even got the teddy bears and scarves to woo the ladies. A must-see for all ages!

Born in 1984, Joseph Hall has been paying tribute to the legacy of Elvis Presley since 2006. He starred on NBC’s America’s Got Talent in 2008, making six TV appearances viewed by more than 90 million people and placing as one of the top 10 finalists! Sharon Osbourne impressed enough to tell him, “I’ve got shoes older than you, but I’d like to try you on!” Also, Piers Morgan quoted saying, ” ELVIS IS BACK!” Joseph Hall has performed all over the world, winning numerous accolades including the “Spirit of Elvis” award. Joseph Hall has worked with Elvis Presley Enterprises, Legends in Concert, and has officially been recognized as one of the top tribute artists in the world today. Hall says “My goal is to capture the essence of Elvis Presley, to pay tribute with the utmost respect to his legacy, his music, his image and above all else his fans.”